Why I am an LGBT+ Ally 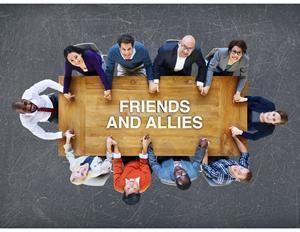 Though, like most Adventists, I was raised without an accepting view of LGBT+ people, I have always felt uncomfortable with that theology.

Even during my young fundamentalist years when I would have repeated the rejecting talking points, I felt deep down that there was something wrong about the lack of acceptance the church taught me. In college one of my dear friends came out, left the church and the school, and I never heard from him again.

I went around to various theology professors asking them to help me understand it. Every one of them gave me the same texts (what many now refer to as “clobber texts”).

They left me feeling uneasy and unsatisfied. This was the beginning of my many-year journey toward acceptance.

When I heard about the Seventh-Gay Adventists film, I drove three hours to see the screening. I had so many questions! Through the film I was introduced to resources that answered many of my questions. I became an ally evangelist! I bought 10 copies of Justin Lee’s book Torn and gave them away to anyone who even mentioned LGBT+ issues in my presence. When I ran out, I bought 10 more.

The message of Jesus is a message of radical acceptance. Though, to my knowledge, Jesus never addressed any LGBT+ theology specifically in the Bible, He spent His entire life showing radical acceptance of people who were rejected by society. His love wasn’t a condescending love, and it wasn’t a love in-spite-of. It was a whole-person love.

This is important because many Christians seem to think showing “love” to LGBT people means condescendingly and sometimes cruelly “correcting” them. But that’s not how Jesus operated at all. His love demonstrated an acceptance of a whole, complicated person.

As it is my life’s goal to love like Jesus, how can I possibly reject people God has made: whole, complicated people who have dreams, troubles, and fears and also happen to be LGBT+.

As a woman, I have some idea of what it means to be less privileged. While I remain incredibly privileged in other ways (I am white and middle class), I have experienced many of the small and large disadvantages that come with being a woman in American society.

As our church struggles at this moment with issues regarding women’s ordination, it reminds me that there are many who are less accepted by society than I am.

As a privileged member of society, it is not only my duty but my honor to stand beside my LGBT+ brothers and sisters as they fight for equality and respect.

If you are LGBT+ you deserve nothing less than to be wholly yourself. You deserve to love whomever you choose. You deserve to be loved. By God, by your church, by your family, and by the society in which you live. Thank you for allowing me to stand with you.