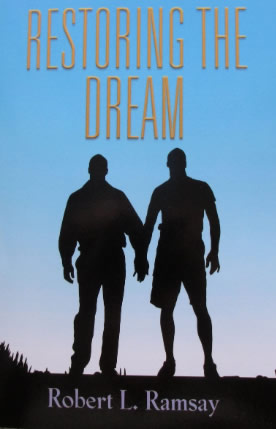 Life is unfolding like a dream for graduate student, Marc LaChance. In his final year at university, student housing pairs him with Howard Hildebrandt. Howard is built like a linebacker, Marc’s dream of what a real man should look like. He discovers that Howard shares his minority affectional orientation, and the two men become lovers.
Looking forward to graduation, they plan to escape Winnipeg’s cold, prairie winters by moving to Vancouver, British Columbia. They imagine their life on the Pacific coast: a house with an ocean view, winter weekends skiing Grouse Mountain, and summers sailing the Salish Sea.

At spring reading break, they make an exploratory trip to Vancouver. Marc obtains an interview with a suburban school district and is promised a teaching position in September. If Howard can land an engineering job on the coast, their dream will be realized.
Marc’s happiness is shattered when Howard tramples their dream into the prairie dust by accepting an engineering position in Winnipeg. His conservative religious upbringing tells him that men who love men will burn in hellfire forever. The guilt over his relationship with Marc is making him sick. He has no choice but to break it off.

Twenty-five years later, disillusioned with his lonely life on the coast, Marc returns to the prairies. He reconnects with his former lover but learns that Howard, after undergoing reparative therapy, plans to marry a woman.

Will Marc win Howard back before he makes the biggest mistake of his life.

Further to the above, one of the characters, Howard, attends a year-long reparative therapy clinic in Pomona, California. In doing research, I read the Ron Lawson reports on Colin Cook and also spoke with men at a GCN conference who had undergone reparative therapy.

Robert lives in White Rock, British Columbia and has been a Kinship member since the 1980s having heard of Kinship’s existence via a local cable television program in Winnipeg, Manitoba. It was an interview style program called Coming Out, hosted by Chris Vogel, one of the first gay activists in Canada. The closing credits included a list of gay Christian organizations such as Dignity (gay Catholic). “I almost fell off the chair when I saw SDA Kinship on the list.” He wrote to the TV station to get Kinship's address, then contacted Ben Pickell, one of Kinship's founders. “I was sent a newsletter and a list of members. The closest one was Gary Stebbeds in Wisconsin. He and I became good friends. We chatted by telephone every Friday evening until he passed away a couple of years ago.”

I wanted to find Kinship members closer to where I lived so using my own name and contact information, I naively placed an ad for Kinship in my local newspaper. Within days of it appearing, I was summoned to appear in the pastor's office. I was asked to recant my belief that gay relationships are right and accepted by God or resign my membership. I refused both requests. I had to hand in my church keys: no more piano playing for the children's divisions, no more leading discussion in an adult SS class, no more choir practice and organ playing. (But, please continue to attend church, even though we've disfellowshipped you.)

I quit attending within a few weeks and except for occasional attendance at SDA churches where pastors are informed and friendly, I worship in churches of other denominations.

Restoring the Dream is available on Amazon.

Summer Memories
MESSAGE FROM THE PRESIDENT