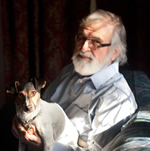 Ron Lawson’s study of Adventism began in North America; and he spent a year driving 28,000 miles around the United States and Canada, interviewing pastors, teachers, administrators, leading laypersons, and students as he traveled. His itinerary included attending the General Conference session in New Orleans where he saw that the church was globalizing, and this caused him to broaden the scope of his research to include other divisions around the world. During his travels, he conducted over 4,000 interviews in 60 countries.

Until recently only academic sociologists have had access to most of his writing on the sociology of religion. Now you, too, can read them at RonaldLawson.net.

Ron has been involved with Seventh-day Adventist Kinship International from its very beginnings. He helped plan the very first Kinship Kampmeeting in 1979 and served as Director of Church Relations for 18 years.

Ronald L. Lawson Ph.D., Professor Emeritus, Queens College, CUNY, served on the faculty of the Urban Studies Department there for over 30 years. He currently lives in Loma Linda, California.